The Annual Advocacy Report 2013: CARP in the Media - CARP
Join Donate Sign In 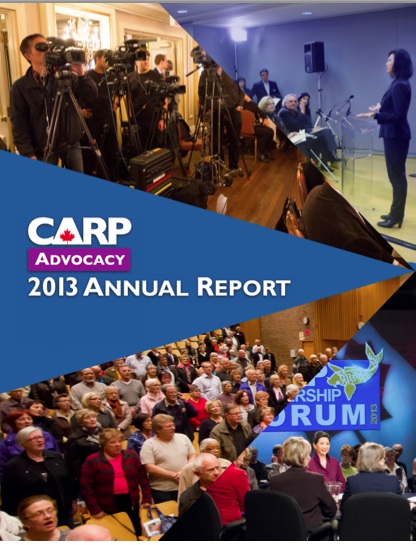 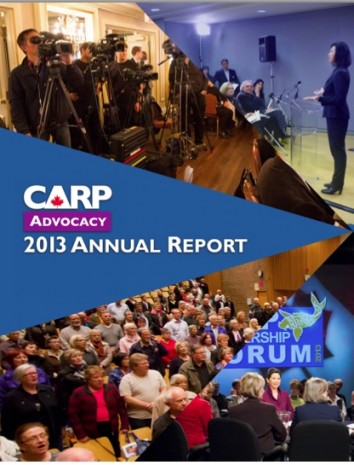 Over the past ﬁve years, CARP has gone from having to push ideas considered novel but not critical to the country’s well-being to providing a framework for considering some of the deﬁning issues of our time.  Through constant media engagement, CARP has been able to shape the public discourse on our ageing population and meaningful healthcare and pension reform.

Making the status quo uncomfortable for decision-makers is a major instrument of advocacy that aligns well with the interests of the media. So CARP is a go-to source for analysis and comment and increasingly, CARP is the major voice juxtaposed with that of established proponents.

CARP names the issues that others avoid, calls for changes backed up by sound research and the authentic voice of CARP members and follows up over the long haul – a professionalism that journalists appreciate. So we can expect CARP issues to continue to corner the headlines.

Here are the main stories on which CARP engaged the media and raised public and government consciousness in 2013:

CARP as Media: Over the past ﬁve years, CARP has built a large and eﬀective communications machine to support CARP’s advocacy initiatives.  Our bi­weekly newsletter, CARP Action Online, has grown into an online magazine with more than 90,000 opt-in subscribers. This makes it the largest newsletter and regular poll for older Canadians.

We attract a regular response of 2,000-5,000 to our richly detailed poll on current topics and policy issues every two weeks, which means we also regularly test the electoral preferences of this bellwether group.  Our stories are picked up by mainstream media and our polls make the headlines and provoke questions in legislatures across Canada on a regular basis.

Susan Eng, CARP’s VP Advocacy is a frequent media commentator and a regular contributor to Zoomer Magazine, a regular guest and panellist on Goldhawk Fights Back, with Dale Goldhawk, TVO’s The Agenda, AM740, Classical 96.3 and The Zoomer Report. She also moderates The CARP Debate™, the country’s only high­proﬁle debates to be successfully hosted by an advocacy organization and broadcast on national TV.

Since its inception in 2010, the CARP Debate™ has very quickly become a mandatory campaign stop.  Candidates would not forego the chance showcase their knowledge of the issues that matter in a televised debate geared towards the only demographic segment that has a 70% voting rate.

Media is a vital tool that has allowed CARP to disseminate our ideas, reach out to new audiences, and gain the credibility and inﬂuence that allows us to generate results in the corridors of power.