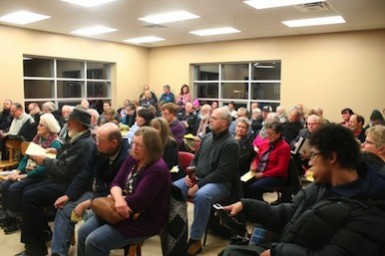 Seniors, small businesses, charities, and persons with disabilities all affected

K’JIPUKTUK, HALIFAX – On December 11th, the day after the House of Commons closed for its Christmas recess, the Harper government announced major cuts at Canada Post.

The timing suggests that the government was hoping that voters would not notice. But judging by the packed town hall dedicated to the cuts people did notice, and what’s more, they will remember for a long time.

Arguing that Canada Post is a money-losing organization, Canada Post management intends to end home delivery in cities and urban areas, eliminate between 8,000 and 10,000 workers, and boost the price of a stamp from $0.63 to $1.00.

The move from door-to-door delivery to community mailboxes will be rolled out over the next five years, starting in the second half of 2014.

This article was published by Robert Devet for Halifax Media Co-op on January 31st, 2014.  To see this article and other related articles on their website, click here.

Well over a hundred people showed up at last night’s town hall at the Woodlawn United Church in Dartmouth. The event was organized by MP Robert Chisholm.

Many people in attendance spoke to voice their opposition to the cuts.

But before the microphone was passed around for comments, speakers representing small independent businesses, pensioners, and people with disabilities talked about what the cuts will mean to their constituents.

Bill VanGorder is Chair of the Nova Scotia chapter of the Canadian Association of Retired Persons (CARP). CARP strongly opposes the end of home delivery. Many of its members are older, and will have trouble getting to the new community mailboxes, especially in the heart of winter and if no caretakers or family are around.

VanGorder talked about a meeting he attended with Deepak Chopra, the Canada Post CEO.

“Deepak Chopra, who had obviously no understanding of seniors issues, had the temerity to suggest that an extra mailbox key for caregivers of family might be a suitable solution,” said VanGorder. “Tell that to the folks in Alberta who have their parent here in Nova Scotia.”

Sherry Costa, the Executive Director of Independent Living Nova Scotia (ILNS), made a similar case. ILNS wants to reduce barriers that prevent persons with disabilities from living and participating fully in their community. Eliminating home mail delivery will be an added hardship for its members.

Jennifer English is a senior policy analyst with the Canadian Federation of Independent Business (CFIB). CFIB represents about 109,000 small businesses in Canada, and strongly opposes both the cuts to service and price hikes for stamps.

“90 percent of independent businesses say that Canada Post is important to their core operation, and the main reason is its low cost,” English said.

Much like the small businesses, Feed Nova Scotia, the well known charity that collects and distributes food to its member food banks all throughout Nova Scotia, also raised the alarm about the announced increased rates.

In a position paper distributed at the Town Hall meeting Feed Nova Scotia refers to the 150,000 letters it sends out each year during three direct mail appeals. Rate increases will have to be absorbed by using financial resoures that could otherwise be used to support Nova Scotians struggling with hunger, the organization writes.

The position paper also points out that people living on low incomes will be hurt by rate increases and often will find it difficult to get to their community mail box because transportation is not easily available. Cost makes internet and a computer not a viable alternative to letters.

Michael Keefe is the Vice President of the Nova Scotia local of the Canadian Union of Postal Workers. In his presentation Keefe took issue with many of the reasons for the Canada Post cuts provided by its management and the Harper Government.

Keefe believes that Canada Post, far from being in trouble, is a viable organization. Keefe points to the 17 out of the past 18 years that Canada Post made a healthy profit to make his case. As well, he suggests that there are other opportunities, such as Postal Banking, that can further cement Canada Post’s future.

So why is Canada Post management making the cuts?

“Letter mail is declining, but it isn’t declining as fast as management forecast,” Keefe told the Halifax Media Co-op after the meeting. “The conservative Government want to drive the letter mail volumes into the ground by raising the cost of sending a letter and reducing service, so that they can sell off or give away the profitable portion of their business, which is parcels.”

And how to make sure that the movement opposing the cuts does not lose focus?

“It’s already working. Deepak Chopra [CEO of Canada Post] has already moved from saying that it’s a done deal to talking about further consultation with stakeholders. I believe Canada Post and the conservative government were counting on the apathy of the public. We really have to keep the pressure on and let the public know that this is not a done deal.

“It’s not a done deal until it’s done across the country.”