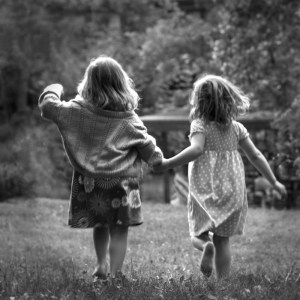 Growing up in Ahuntsic, my best friend, two-and-a-half years older than I, had the unique nickname of Twidge. Her ‘real’ name was Dorothy, but only school teachers called her that. The story was that when she was an infant that was the sound she consistently made, so Twidge she became. To verify if such a word existed anywhere, I asked Google, which came up with “widget” while Spellcheck offered “twinge”. Therefore I am safe in declaring that the name, and the owner of the name were, indeed, unique.

My parents’ and brother’s arrival in our house in Ahuntsic pre-dates my friend’s family, who took possession of their house in 1927. The original owners were a lively, noisy, friendly bunch, who shall be nameless in case there are any living relatives. One day, one of the young women invited my mother to go shopping. She readily agreed and off they went. As they were leaving the store my Mum noticed that her companion had somehow missed checking out her groceries at the cashier. Outside she said quietly, “I think you forgot to pay”. “No, I didn’t forget”, was the reply, “Let’s go.”

“Is that the way you always shop?”

Next time my mother was invited, she managed to be “too busy”.

The new neighbours not only paid for their groceries, but had a piano which was beautifully played by my friend’s mother, who had once aspired to be a concert pianist. Twidge also had musical talent, but preferred running around outside and “building things” to practising. Her Dad was a professor of mechanical engineering at McGill University, and she later became one of the few female engineering students in that faculty. Another plus was the fact that her Dad built a tennis-court right there at the north end of their front yard. Imagine, a tennis court! In addition to helping lay and secure the tapes, we were permitted to help rake and roll it and when the adults hit the ball over the fence, we searched the prickly wild rose bushes in the field for those errant missiles. In payment of these labours we were allowed to play any time – unless there were grown-ups around, who got first dibs. Luckily during the week, most of them did something called “work”, which left lots of time on the court for us.

We also cooked up “plays”, and our mothers were invited – insistently – to become our audience. Our first scenes were always full of drama, after which they rapidly petered out, as we never got around to figuring out what would happen next. Our “audience” would sit politely for several minutes, then rise with their teacups and return to the dining room. We would then give up the theatre for the moment, and go out and build something. They always had stray pieces of wood in their back yard, tempting us to plan several structures which we intended to create. We had some success nailing a few boards together, but invariably they collapsed. We would then stow the pieces away until inspired by our next project.   This was also the area where we had our Bug and Bird Cemetery, where those small creatures who had expired in our vicinity were ceremoniously laid to rest.

Although Twidge really wanted to be an engineer, what she was, was a natural-born teacher. I should know. I was her first victim, that is to say, student. Being two grades ahead of me, she was able to provide helpful navigational advice when I began my education at Ahuntsic School, in grade one, there being no kindergarten there in those days. At that time, the first thing you saw when you came in the front door of the school, were very large pictures of the two princesses, Elizabeth and Margaret. Twidge bore an uncanny resemblance to Elizabeth to the point where, after my first visit to the school I asked her why her picture was on the wall? I know her mother was English; could there have been some royal connection lurking in the background? Will their story suddenly appear on PBS? I’ll watch for it, just in case.

One day when she was in grade six or seven, she came up with a plot. We had a large lot to the south of the school building. Our plan was to convince our fellow-students that there was an entire village under the earth; and we offered guided tours – above ground – to explain the intricacies of life below. We became so convincing – at least in the short term – I almost persuaded myself that this civilization did actually exist. Our careers as tour-guides did not last long, as skepticism among our “tourists” required wilder and wilder scenarios, at which point we decided to “go out of business”.

Twidge reached high school two years ahead of me, of course. This provided her with additional ammunition with which to test me.   X + Y? Easy as pi(e). Then came Latin. The first sentence I learned and the last I still remember is Agricola est in agram. Translation: The farmer is in the field.

While we were surrounded by fields and Mr. Lemay’s horse wandered through them munching grass in the off snow-plow season, there wasn’t a farmer in sight. The phrase has, therefore, survived intact and unused, an answer waiting in vain for a question.

In those days, Ahuntsic School had seven classrooms and about 175 students. Now it accommodates 470.   On my next trip to Montreal I think I plan to visit my old school, which has expanded considerably, and check out what’s left of our imaginary underground village. Just to make sure it’s still there.