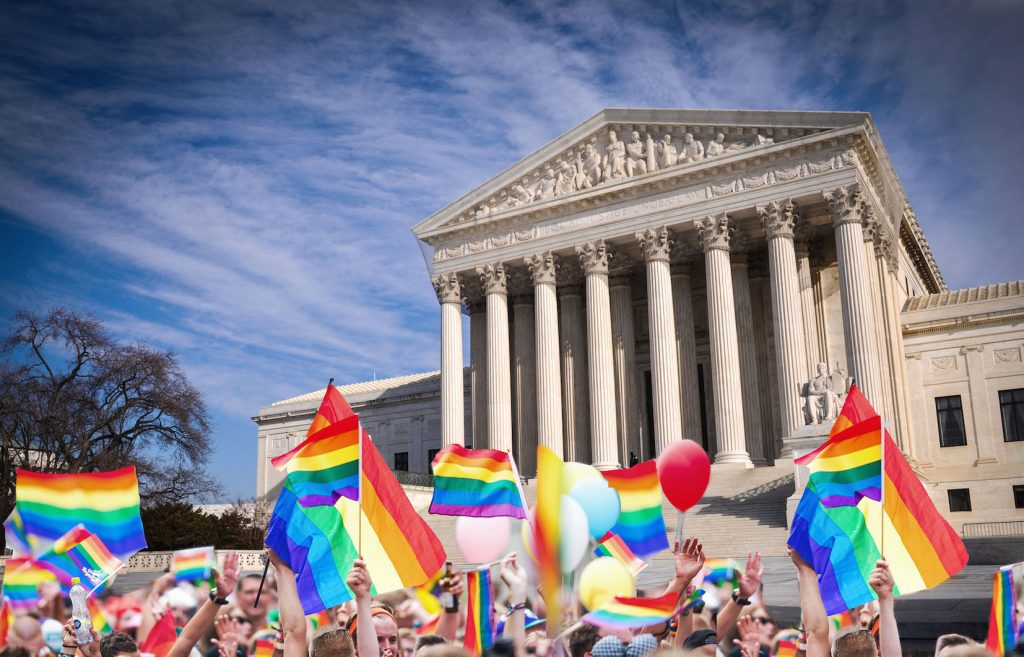 Same-sex marriage has been legal in Canada for over a decade and just last week, on June 26th, 2015, the United-States followed suit. Before the ruling there had been a patchwork quilt of legislation that differed from one state to another. But Friday, in a historic 5-4 ruling, the U.S. Supreme Court ruled that denying same-sex couples the freedom to marry violates the U.S. Constitution. The ruling invalidates discriminatory laws in Kentucky, Michigan, Ohio, and Tennessee upheld by the Sixth Circuit Court of Appeals, and as a practical matter, requires all 50 states to allow same-sex couples to marry.

American Civil Liberties Union Executive Director Anthony D. Romero said that the decision (Obergefell v. Hodges) had been 50 years in the making and that it would “stand with Brown vs. Board of Education as one of the landmark civil rights moments of our time.”

This kind of legitimization, particularly over time, has an effect on public opinion, so it is not surprising that same-sex marriage enjoys slightly more widespread support among the Canadian public (7 in 10 Canadians support it, according to a recent Forum poll) than among the American public (a recent CNN/ORC poll indicates 5.9 in 10 Americans support the recent decision).

The National Post details the findings of a the Forum Poll on same-sex marriage. The paper suggests that the landscape is changing and that Canadians are becoming more accepting of inclusive marriage. According to this poll, the change stems primarily from older, male or less educated citizens — groups Forum Research says have traditionally been less open to marriage equity.

In this issue we also published “Senior Housing for Older LGBT Adults a New Part of the Landscape”, an excellent article that explains the reasons that specialized facilities are needed, but also provides a very good synopsis on the research findings of studies that have profiled older LGBT adults. One of the studies cited notes that more than four out of five older LGBT persons have been victimized because of their sexual orientation or gender at least once in their lives, and more than three out of five have been victimized more than three times.

Victimization due to sexual orientation is only one of several factors that might make an LGBT-specific facility worthwhile for some people. Many LGBT older adults have encountered discrimination in employment and housing, reducing their economic security. Experiences of discrimination are linked with poor health outcomes, such as depression among both chronically ill LGBT older adults and their informal caregivers.

Tracking the source document used in the article and delving into the research files I read that the LGBT respondents reported greater rates of disability, depression, and loneliness, and were more likely to smoke and binge-drink compared to heterosexuals of similar ages. The study indicates that 13% had been denied health care or received inferior care. Still, LGBT older adults remained resilient: 90% engaged in wellness activities like meditation and 82% said they regularly exercised. Nearly all of them felt good about belonging to the LGBT community, and more than a third stated that they attended spiritual or religious services.

When discussing the plight of ageing LGBT seniors, it is often said that going to a traditional retirement home can mean being forced back into the closet. When people ask what this means, it is difficult to explain because it covers so many areas. In late June 2014, Macleans wrote about the homophobia that baby boomers and seniors encountered as they age:

When 52-year-old Fraser Doke underwent a liver transplant in Vancouver last year, he found himself in an uncomfortable position that had nothing to do with his health. The surgery, recommended after he was diagnosed with two tumours on his liver a year before, had gone just fine. But the care he received afterward, at the University of British Columbia Hospital, had not. One of the nurses on his floor approached him and asked that he refrain from talking about his “past life” in front of his three roommates. “I’m not saying that we don’t accept you,” she told him. “I’m just saying . . . be a bit quieter.”

But it is the anecdote that follows that is truly shocking and disturbing and that highlights the need to educate, sensitize and do better:

After the incident at the hospital, Doke randomly phoned some private retirement homes and long-term care facilities in British Columbia under false pretences. “I have a friend who is transgendered and looking for placement,” he would say. “Is that going to be a problem?” No one institution was blatantly offensive, he says, but they were squeamish. Most agreed to “accept” an LGBT resident, but expressed a hope that he or she would “please keep it private.”

Fortunately, today there are some gay-friendly, long-term care facilities in North America, including Toronto’s Fudger House, one of three homes in the city that prides itself on catering to sexually diverse seniors. A few weeks ago plans for an LGBT seniors’ facility were announced in Edmonton. Although few details are available at the moment, this is great news! Two years ago, Sweden’s Regnbagen (Rainbow) House opened its doors to LGBT seniors in Stockholm, becoming Europe’s very first all-gay retirement home. In Vancouver, Gay and Grey founder Herbert, 69, appreciates that such a facility exists, but is more interested, in the long run, in seeing mainstream senior services become more tolerant. “No one wants to create a ghetto and no one wants to be seen as excluding anyone else,” he says.

Of course, those who are better off always have more options. Things are tougher for low-income LGBT seniors trying to find affordable housing. It’s always difficult for a person with no special needs to find affordable housing, when you compound potential mobility hindrances with everything else it must be next to impossible. In the United-States there are some very excited projects taking place on this front.

In January 2015, New York-based SAGE (Services & Advocacy for LGBT Elders) announced a first-of-its-kind initiative bringing together high-profile affordable-housing advocates, developers, and LGBTQ organizations to form a “national, comprehensive LGBT elder housing strategy.” The groups involved—including Enterprise Community Partners, HELP USA, the Los Angeles LGBT Center, and the D.C.-based Equal Rights Center—represent housing developers, affordable-housing strategists, and even federal-level leadership through HUD. The goal of the alliance is to make sure LGBTQ seniors have affordable living options, that their rights are protected, and that they have the opportunity to age among their communities.

“There is an affordable-housing crisis in America—period,” says Jennifer Ho, senior adviser to HUD Secretary Julián Castro and the “principal queer” representing the agency in this effort. “America is aging at a rapid pace, and they are losing income in collision with the affordable-housing crisis,” she says. “America is going to have to face the needs of an aging population, and LGBT people are part of that. Those of us in the younger generation owe it to the older generation who showed the way.”

Michael Adams, executive director of SAGE, says that state and local support for affordable housing for LGBTQ seniors is “incredibly important.” “Most of this work happens at this level,” he says. “We are pleased to be working with a network of 27 cites and 20 states that have made this a focus for the next four years.”

But not all the great ideas and projects will require bricks and mortar; one of our own Canadian programs is highly innovative and has the potential to make a real difference for LGBT seniors. Simon Fraser University gerontology professor Gloria Gutman and a colleague recently launched LGBT End-of-Life Conversations, a website that helps seniors in Vancouver, Edmonton, Toronto, Montreal and Halifax find LGBT-friendly service providers who can help with things like accessing housing or health care facilities, or preparing living wills or representation agreements.

The website is part of Gutman’s research, which looked at the challenges and stigma that some queer seniors in the five Canadian cities face inside care homes and within their communities.

“It was an issue of staff not understanding their needs … or being homophobic,” Gutman said in an interview with On The Island. “Sometimes there was discrimination on the part of other residents who aren’t welcoming.”

Gutman calls the discrimination that some LGBT seniors face a form of elder abuse and she is right. Everyone is entitled to respect, comfort, dignity and understanding as they grow old. It has been over a decade since we legislated equal marriage rights, the United-States just caught up, and yet there are still seniors who are asked to be someone they are not when they try to receive long-term care. Perhaps it is time to focus on securing the rights of LGBT seniors.