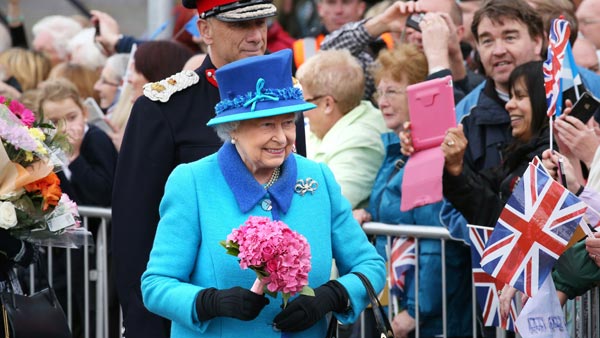 Earlier today at 17:30pm British Summer Time, Queen Elizabeth II became the United Kingdom’s longest reigning monarch. Surpassing her great-great-grandmother, Queen Victoria, the Queen had reigned for 23,226 days, 16 hours and approximately 30 minutes when the clock struck 5:30. A BBC team took on the arduous but highly fascinating task of counting up much more about the Queen’s years on the throne than the actual minutes spent. For instance, her great-great-grandmother ruled an empire that encompassed 400 million inhabitants and now, the Queen is head of state for a more modest realm of 138 million.

As she spoke briefly to a crowd of well-wishers in Tweedbank, Scotland, the 89-year-old monarch admitted that this milestone was “not one to which I have ever aspired”. To her, this was primarily another day to carry on with business as usual as she officially opened the new £294 million Scottish Borders Railway. However, official duties did not interfere with taking time to recognize today’s historic and public significance.

“Inevitably a long life can pass by many milestones – my own is no exception – but I thank you all and the many others at home and overseas for your touching messages of great kindness,” she said.

While the Queen’s empire may be smaller than it was over a century ago, her ability to reach a worldwide audience at a moment’s notice has exponentially grown in recent years thanks to the advent of social media. The British Monarchy has a number of social media accounts and, as such, seem more accessible than ever before. Today, the Twitter hashtags #QueenElizabeth, #longestreign, #GodSaveTheQueen and more were all trending in light of the plethora of news, commentary and congratulations generated by this momentous occasion.

Searching the hashtag #longestreign, here is a selection of our favourite social media acknowledgements of a milestone 63 years in the making.

“Inevitably a long life can pass many milestones” – The Queen reflects on her #longestreign http://t.co/jGFmOj3dh5 http://t.co/ZjcBjbbKAy

PM: It is of course typical of her selfless sense of service that she would have us treat this day just like any other. #LongestReign

A photo from Her Majesty The Queen’s coronation in 1953 to mark this important milestone. #longestreign pic.twitter.com/dIDBbgcKjI

Congrats on the #longestreign @BritishMonarchy. About time for another visit (signing our guest book in 1984)? pic.twitter.com/X7RFQ2PyTu

The monarchy remains as popular as ever, according to a Sky poll #longestreign http://t.co/gQR46hwasc pic.twitter.com/sVHNgNsgFN

At 8pm tonight we bring you The Braemar Gathering at Balmoral: http://t.co/n43mwFsU2L …it’s all to celebrate the #longestreign

To celebrate the #LongestReign a new photo has been released of Queen Elizabeth II. pic.twitter.com/99dBdVfXf3

In 2013, Queen Elizabeth II received a BAFTA for her outstanding support of the film & TV industries. #longestreign pic.twitter.com/G9peaj1dUJ

The 25-year-old Queen in 1952 waving as she returned to Clarence House the day after she became monarch #longestreign pic.twitter.com/LcZnUwDeA3