Shuffle Your Feet for Viva Elvis Week on VisionTV! 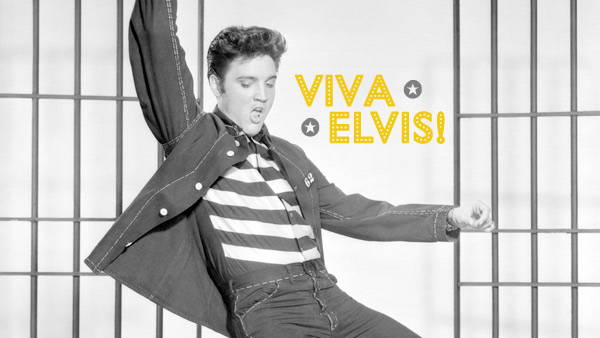 Beginning Monday, July 18, VisionTV has a hunk a, hunk a hip shakin’ programming designed to celebrate the life and mega-talents of Elvis Presley. So get your peanut butter, bacon and banana sandwich ready for a week with the one and only King of Rock N’ Roll!

In addition to a series of Presley feature films, we’ll also bring you special Elvis-related episodes of “The Conspiracy Show with Richard Syrett,” as well as “The Gaither Gospel Hour.”

Here is a look at the week ahead!

In this romantic musical comedy, a lieutenant discovers he has a lookalike cousin when he returns to the Appalachians. His attempts to convince his kinfolk to allow the Army to build a missile site on their land are soon complicated by suspicions and beautiful women.

While working as a waiter in Las Vegas, Lucky swims in a sea of all the wrong girls, until he finally stumbles upon the woman of his dreams, Rusty Martin. It’s all fun and games until Lucky loses Rusty and must search the glittering desert mecca in order to win her back.

A rodeo champ who is part Native American returns to the reservation to help his tribe. But no matter how hard he tries, his efforts always seem to backfire.

– Is Elvis Still Alive and Well? –

On Tuesday, July 19 at 2am ET/11pm PT (immediately following “Kissin’ Cousins”), “The Conspiracy Show with Richard Syrett” investigates the long-held theory that Elvis Presley faked his own death.

– Showcasing the Spiritual Side of the King –

On Friday, July 22 at 9pm ET/6pm PT, The Gaither Gospel Hour documentary, “Elvis – He Touched Me,” takes an in-depth look at the influence in which gospel music had on Elvis.

– Shuffle Down to The 2016 Collingwood Elvis Festival! –

From July 20-25, The 2016 Collingwood Elvis Festival takes over the region’s downtown core! Once again, ZoomerRadio is the official radio sponsor of the festivities.

The world’s largest Elvis Festival features some of the greatest Elvis tribute artists in the world performing on “Live Stages”, a Ribfest, Vegas style shows, great food and Elvis merchandise.  Zoomer Radio will be filing live reports and while you are there sign up for our Zoomer Fan Club at our Zoomer Radio display and receive a free Limited Edition Zoomer keychain!

Looking for some fun Elvis facts? If so, we have them right here!