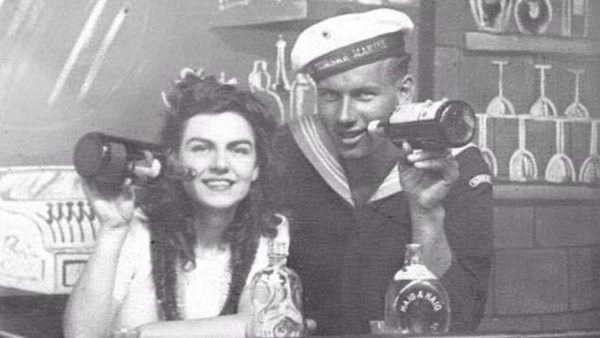 Back in 1945, Rolf Christoffersen was serving in World War II with the Norwegian navy while his wife, Virginia, was at home, missing her man and longing for his return home. In May of that year, Virginia wrote an exquisite love letter to her husband.

Flash forward 72 years and that very letter was re-discovered in the Westfield, New Jersey home of Melissa Fahy, in a gap under the stairs.

“It was really sweet to see that long-distance love,” said Fahy of the letter during an interview with WNBC-TV in New York.

In the letter, Virginia spoke openly and candidly about her love for Rolf and her desire to have him back home.

“I still have a few minutes on my lunch hour and I was dreaming about you so I thought I’d write a little love letter to my favourite pin-up boy,” wrote Virginia. “Are you as lonesome for me as I am for you? I wonder how you spend your free time when you’re not working on the boat.

“I love you Rolf,” continued the letter, “as I love the warm sun, and that is what you are to my life, the sun about which everything else revolves around me.”

One other factor at play was Virginia’s pregnancy, a subject in which she went into great detail for Rolf.

“I feel wonderful and the doctor says everything is perfectly all right and normal so far,” explained Virginia. “I just feel happy and proud to be carrying the baby of the person I love the most in the world.”

Fahy was so touched by this letter that she took to Facebook in an attempt to find a Christoffersen family member. Eventually, the couple’s son was tracked down in California and had the letter delivered to him.

Although Virginia unfortunately passed away six years ago, the son did read the letter to 96-year-old Rolf.

Concluded Fahy: “In a way, I guess it’s his wife coming back and making her memory alive again.”

If you are a fan of magical love stories, join us Tuesdays at 8pm ET/5pm PT for “Victoria”!