John Lennon and George Harrison may no longer be with us, but it’s hard to not be inspired by the fact that surviving Beatles Paul McCartney (75) and Ringo Starr (77) continue to make music and tour.

“Well, I just called [Paul] up and said, ‘I got this song called ‘Show Me the Way,’ and I want you to play on it,’” said Starr during an interview with Rolling Stone. “Because he is a really good friend of mine, he said he’d come to L.A. for it. It’s about [my wife] Barbara. She shows me the way. I wanted it to be very personal. While he was there, he also played on ‘We’re on the Road Again.’ That was very kind of him.” 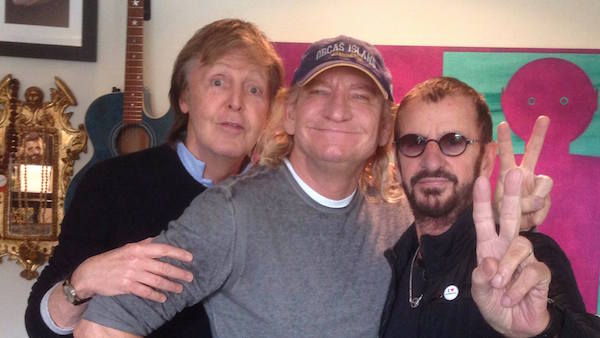 Apart from their friendship, what helps this collaboration take on a greater life is the respect Starr continues to have for McCartney as a musician and a person.

“Paul’s an incredible musician. He’s incredible at singing too and as a writer, but for me, as a bass player, he is the finest and the most melodic. It’s always fun when we’re playing together,” continued Starr. “I’ve played on several of his records, mainly in the Nineties. People keep saying, ‘Oh, it’s been so long.’ It’s not been that long. We did the Grammys, we did that Beat­les show three years ago. So we are still pals, but we don’t live in each other’s pocket.”

McCartney has been busy sharing his talents of late. Recently, it became known that he drummed on the forthcoming Foo Fighters album, “Concrete and Gold.”

You can listen to “We’re on the Road Again” below.

If you love nothing more than the beauty of a great tune, join VisionTV on Fridays for a wide array of music-related programming. Click here for more information.