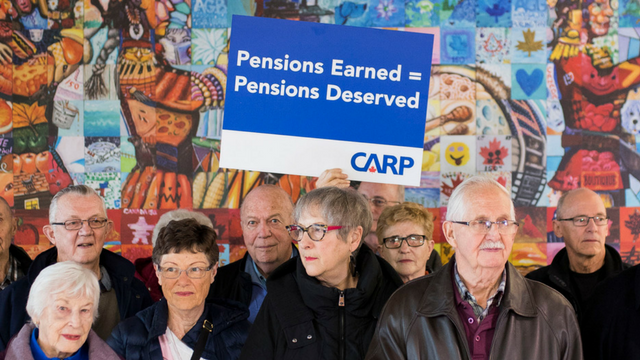 This originally appeared in the May 2018 issue of Zoomer Magazine.

As seniors suffer, CARP looks to add pension reform to its menu of victories By Wanda Morris

When I was recruited to join CARP two years ago, some people warned me off. They said CARP was just a benefits organization and that our members weren’t actively engaged in advocacy. Of course, that’s disproven by the impressive list of recent victories, such as an enhanced Canada Pension Plan, $5 billion for improved home care and rollback of OAS eligibility to age 65. But most recently, it’s our CARP members’ reaction to the plight of Sears’ pensioners that puts that myth to rest.

Our members were horrified to learn that our current laws are broken; that current pension and insolvency legislation was used to exploit pensioners instead of protecting them. Sears Canada was stripped of assets in order to pay out $1.5 billion in dividends and executive bonuses, while underfunding its pension obligations by $267 million – entirely legally.

In response, CARP circulated a petition that received more than 28,000 signatures and held a lobby day on Parliament Hill, targeting critical policy-makers. But with no resulting promise of action from the government, we knew we needed to do more.

On Feb. 21, CARP and our coalition partners held a National Day of Action to Protect Pensions. We organized 92 meetings and events across the country that day and in the days that followed. We met directly with more than 60 MPs. Where face-to-face meetings were not possible, we presented our case for change as well as our petition to office staff.

Well, we certainly got the government’s attention! Parliament Hill was buzzing with talk of all the constituents who visited local offices. Then, the federal budget included an acknowledgement of pension security problems – clearly, a late addition that points to the impact of our activism – and we know that MPs are continuing to bring up this issue in caucus.

In the budget, the government committed to seek feedback. We have convened a panel of experts to provide the evidence-based information they need and are urging the government to report to Cabinet by June 30.

People who spent careers contributing money and effort to build pension funds should no longer lose retirement security through legal exploitation.  They need government action now before the next Sears-type bankruptcy comes along. We won’t let up the pressure until that action is delivered.

Of course, pension protection isn’t the only issue we are tackling at CARP.  We are also working for RRIF reform and on seniors’ homelessness and the safety of residents in long-term care, to name but a few.

None of this would be possible without your support.  Together, we can continue to fight for a Canada where everyone has appropriate health care and financial security and is treated with dignity and respect, regardless of their age, their health or their finances.

Help CARP keep the pressure on, go to carp.ca/pensioners to learn more and get involved.

Republished with permission from Zoomer Magazine.