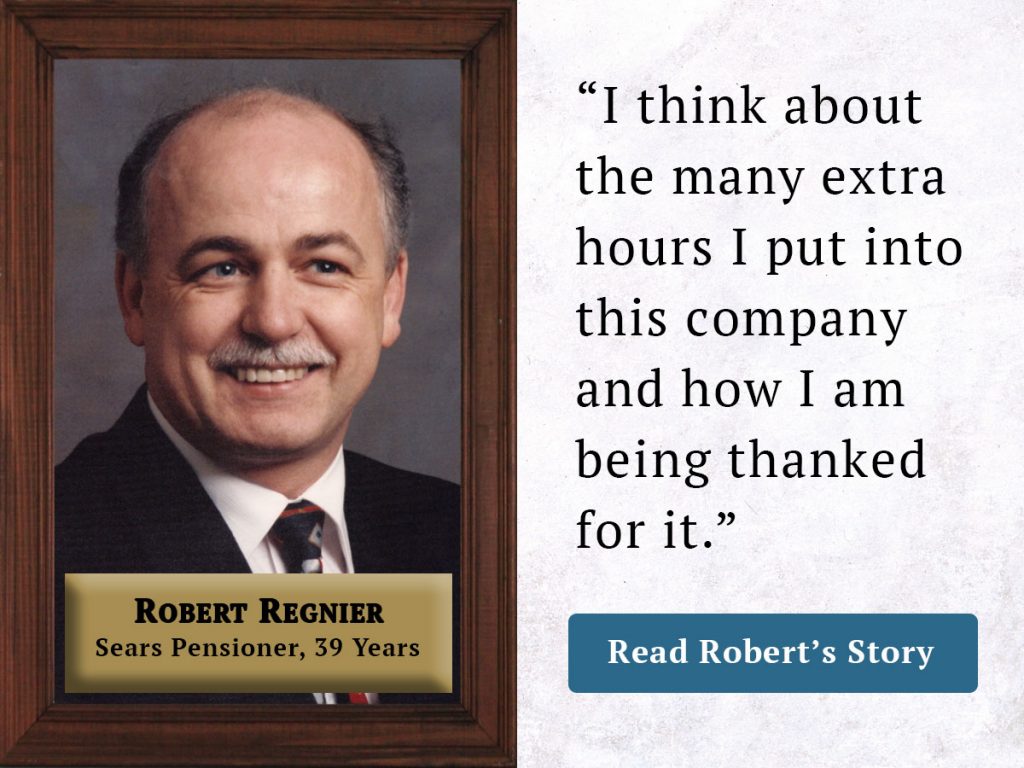 September 2017 – When Sears Canada filed for insolvency and announced they would cut pensions and health benefits as part of its corporate restructuring, CARP took action!

We invited pensioners to share their stories and launched a petition to create change to better protect pensioners. Here is the first in our series of “Letters from Pensioners”:

Is this how 39 years of hard work should be rewarded?

I started my employment with Sears on Aug 14th, 1978. Thirty-nine years later, I received my retirement package. I was promised health and dental coverage for my wife and me for the rest of our lives. I was counting on this. Now that I’m ready to retire, 39 years later, these benefits are being taken away.

I was also relying on a reasonable pension amount to try to live comfortably for my remaining years. That too has been affected by the fact that Sears has been given permission to hold back its payments to our pension plan.

Life insurance will also be discontinued on Sept 30th, 2017. Although this was not a large amount it was still extra money that could have gone to my wife, my children and my grandchildren. It’s a good thing that we decided to purchase life insurance on our own.

How will this affect me and my wife personally?

So, I pay more to have less. I worked my butt off for this company only to realize that they are looking out for themselves and to hell with the employees.

How does the government protect me and many others from basically getting screwed?

Payout to top brass. Let’s look at it this way:

These people were well paid to keep the company going (profitable) and failed. Now they will continue to be well paid PLUS they will get to share in the $9 million in bonuses.

So, they didn’t do their jobs the first time, let’s pay them again and offer them an incentive. We can get the money from the thousands of employees who are getting nothing. All this, while the part-time employees, who are still in the stores with up to 38 years of service get nothing, zilch, nada, 0.

Now when I consider my retirement I think about the many extra hours that I put into this company and how I am being thanked for it.

I remember organizing trade shows and working in excess of 100 hours in a week to make sure things ran smoothly. The extra nights, the calls after midnight to check alarms after being notified of a possible break in.

I could go and on and list the days and weeks of extra time I was asked to be in the store and was never paid or given time off for. This was an expectation of Sears and the store management. Cut staff, no problem, we can get one of the ASM’s to work.

Well, this is some of my story. I am extremely disappointed with Sears. I never expected to be treated like this by a company that I have given almost 39 years of my life. I now have to worry about paying regular bills, and doing some of the things that we had planned for our retirement.

Really, do I have to look for part time work to survive?

Thank you,
Robert Regnier, Cornwall, ON